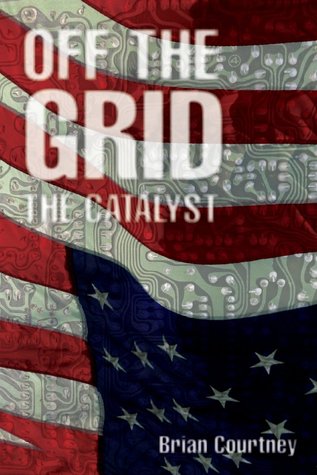 I received and ARC of OFF THE GRID THE CATALYST from the author BRIAN COURTNEY.  In exchange for an honest opinion. This is Mismousey’s very honest of his book.

Brian Courtney is brand new author and this is his very first book.That being said- he has done such an magnificent job with bringing pen to paper in OFF THE GRID. Never have I read such a story as this one. Mr. Courtney has brought such a thought provoking and deep subject into his story line.The way in which he describes he subjects/characters and the scenes are truly amazing. You are able to actually get to feel the emotions of each characters as they are going them. Mr. Courtney talks about drugs-drinking-government-god- the devil-women-and running away in this book. He also speaks about wanting to”WHY” to certain questions.

The main character is a man by the name of Pan – this is a nickname that started in school and has stayed with him. so much so that he has a fake id with the name of Pan a Mc Candless on it.Now Pan doesn’t really have any friends and he is hard to get to know. In his previous life he worn a suit and tie and sold computer, software and such.

Now- he just gets by. He hides his money and hangs out at a bar . Sleeps with a women above the bar. He remembers parts of his childhood with his mother. When he washed rocks and tried to sell them for money. No one bought them – but his mother did help come up idea on making some money.

Pan was into drinking and drugs heavy. He loved his women and sex. He couldn’t get enough. When he was younger and going to school. He always asked the “why” and his teachers came back with ” because I said so” Could you imagine that. ( but isn’t that what we tell our children today? it makes you think)

When a large women was speaking of going to hell one day for being proud of themselves and their accomplishments. Pan yelled at her and told her that no they don’t go to hell for being proud, envious or angry or for being lazy, greedy or lustful.People should be proud of tgood insighemselves and their accomplishments, envy and jealousy are natural and drive people to do better, and anger is completely normal because everyone gets angry. All seven of these feelings are inherent and very necessary Pan has a good insight on how and why one would go to hell.

Now all his life Pan has suffered depression, trouble with authority,and distrust of everyone. He lives a very complex life. Pan lives off the grid. No record of him or his where about. Just the way he likes it.

I recommend this book to all readers. I found it very interesting and really enjoyed reading it. MisMousey looks forward to reading more of Brian Courtney books in the future. And I have to say “Thank you for allowing me to read your amazing -fantastic-very thought provoking- and terrific read. You are in deed a talented author !! Mismousey gives this book a 50 out 5 stars.

SO WHAT ARE YOU WAITING FOR ?? RUN AND GET YOUR COPY TODAY AND GO OFF THE GRID FOR AWHILE AND READ IT!! GET IT NOW!!!