Welcome to my stop on the “Sexy Shifters” Blog Tour! Today I will be spotlighting Saved by the Dragon by Vivienne Savage and the multi-author anthology Beauties and Beasts!

Buy on Amazon|Add to Goodreads

Chloe Ellis’ decision to celebrate the end of a turbulent relationship sends her off for a weekend of hiking and bonding with Mother Nature. When a rainstorm strikes during a spontaneous mountain climb, she has no choice but to seek shelter – and become hopelessly lost within a dank and dismal cave system. There’s one more problem: her golden-eyed, incredibly sexy rescuer isn’t the average hiker. He’s also a dragon.

This 25,000-word, humorous novella is the first part of a series featuring hot shifters. It contains strong sexual themes and is not intended for readers under adult age. 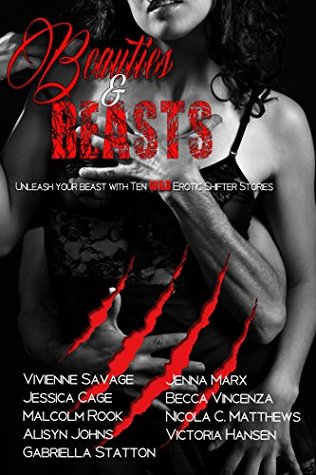 Buy on Amazon|Add to Goodreads

In this collection, we offer nine spicy stories of shape shifters and werebeasts on the prowl for love. Prepare for a delicious treat including panthers, selkies, vampires, and werebears (oh my).

The Fire Within – For Nuria the most important thing is getting her wings so that she may leave her realm to explore other worlds. A Phoenix just isn’t whole with her wings. In order to accomplish this she must conquer her own sexual being and unleash the fire within.

Bearing Her Wishes – Unrequited love is a bitter pill to swallow, but for a bear shifter named Leiv, a single wish may be enough to make his dreams come true.

Freelance – Dominic is about to get the greatest bounty of all. Dom doesn’t ask questions, you pay, he gets the job done. Eden is just looking for a little adventure in her life. They were not expecting each other.

Elf Struck – Alex and Brody – Reagan’s life is at a crossroads. Poised on the brink of achieving professional success, she must come to terms with the fact that her marriage is failing. Her tears in the water summon not one but two sexy selkies intent on soothing her distress.

Undesireable – All her life Adria has known one fact; Undesirables were the enemy, and must be exterminated. But when she inadvertently rescues one from hi own kind, she discovers there’s as much human in them as beast.

The Gods of Darkness – Alexander had grown tired of the yearly Blood Ceremonies. It all had become dull, until Reeve entered his courtyard dressed in mourner’s black. Would their destinies be entwined for eternity, or would Reeve’s fear push her over the edge?

Wolfsbane – A girl’s quest for revenge leads somewhere unexpected, but is the enemy who she thinks?

Rogue Mate – As a rogue Werewolf, Alex Murphy separated himself from society for eight years. When Werepanther, Dr. Helena Bay meets him, she has no way of fighting the animal attraction between them. With her ability to read minds disabled, she must find other ways to get to know him and discover if he is as wild as his history suggests.

To Catch a Panther – Alondra Hastings is the only vet in a rural town in Vermont. She balances life between her work, son, and their adopted cat. When the local barber takes his wife on vacation, leaving his sexy, nephew, Devon, in charge, things begin to heat up. Things are not always what they seem, even in this small town.

Vivienne Savage is a pseudonym, created as a brand for her new line of paranormal erotica and shapeshifter stories.

Future stories include bears, sexy stallion shifters, and other hotties.

One thought on “DO YOU LIKE SHIFTERS?? HOW BOUT SEXY ONES? THEN YOU NEED TO READ SAVED BY THE DRAGON!!”