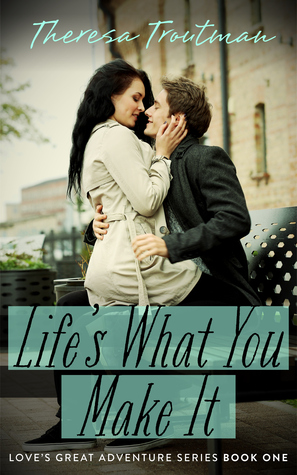 THIS IS AN AMAZING BOOK AND IT HOT!!
I received an ARC from the author Theresa Troutman in exchange for an honest opinion. This is Mismousey’s very honest opinion of LIFE’S WHAT YOU MAKE YOU MAKE IT.
Having read one other book written by Ms Troutman- I knew that this one would be amazing. Ms. Troutman had written a book that was included in Indulgence – which was so FANTASTIC THAT YOU HAVE TO GET THAT BOOK!! Now let’s get back to this one- LIFE’S WHAT YOU MAKE IT.
Ms. Troutman has a wonderful way in writing her stories when she takes pen to paper. She creates such a magical story an whisk you away to time in the past. That contains everything that our teenagers are doing today. Ms. Troutman is able to describe her characters in such detail that you are able to visualize each of right before your eyes. You see Sebastian, Penny, Prince Alistar, ( these 2 are referred to Libertines.) Nanny Jones. when he reaches America he meets more people. As for her scenes -omg she has them down to the smallest detail!!
Once you start reading -you will not want to stop. As Ms. Troutman has you captured from the ery first page.You have to find out what happens next to this young teeneger.
So let the mouse tell you about this FANTASTIC-WONDERFUL-MAGNIFIC-AWESOME STORY!!
Life’s What You Make It is about a young teenager named Sebastian whose mother is loaded. She has him going to a private school by the name of Eaton. As for him he likes to drink-do drugs had have sex. He lives in London. It is allowed where he lives. Sebastian lives in a castle as he puts. The story opens with him in bed with a couple of girls. He decides that this weekend that he is taking all his friends to his house to celebrate his birthday. when they get there- he goes upstairs and tells Nanny Jones he is there and that he loves her. He thinks of her as his mother, She has raised him all his life. His mother has never had anything to do with him. He thinks of her as a well you will just have to read it to find out. Any way they party that night everyone is drinking and doing cocaine. The next day is his birthday -at the party his friend Colin collapsed and died from a drug over dose. Not good at all they had to call their attorneys and Sebastian was praying his mother would not find out. Now the next day he is demanded to take his exams – because of what went down he can’t. He walks out on them and goes to Penny. They flee to Spain for a week. When he gets Back his mother is furious! She is sending him to a catholic school in America.
This is when the story gets real good. Nanny Jones goes with him. Lots of things happen to him in America. For you to find out what happens to him. YOU HAVE TO READ THIS BOOK!!! I recommend this book to all to read. Mismousey gives this book a 60 out of 5 stars. MAKE SURE THAT YOU ADD THIS BOOK TO YOUR GOODREADS READING LIST. THEN RUN AND GET YOUR COPY NOW!!!