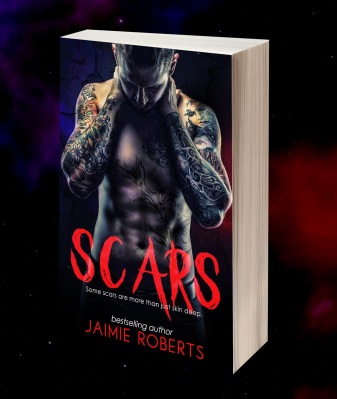 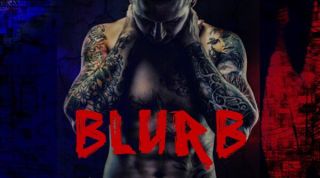 At least, that’s what I thought.

But you changed all that.

You are always there … Always watching … Always waiting in the shadows. You send me flowers and messages. You stalk me, trace my every movement…

Until that one day, in a silly game of Seven Minutes in Heaven, when I finally get to feel you—have a taste of you …

It left me wanting more.

One catastrophic day, my wish is granted.

Just past my eighteenth birthday, tragedy strikes and I watch my family die before my eyes.

You are there. You rescue me. You choose my life over my older sister’s, and I hate you for that. I hate you for taking me and imprisoning me. You say it’s for my sake, but I know it’s for your own. You make me see that my life could be much worse without you in it…

You make me see true darkness.

It is in that darkness you make me desperate for your presence, your touch, your caress. You make me need you… You make it impossible for me to live without you… And then, eventually…

You make me fall in love with you.

Secrets will always wound the ones twisted within their web of lies… But the ones I’m tangled in … are deadly.

WARNING: Although this book (overall) is not a dark read, one chapter is an exception, and contains the following triggers: childhood sexual/emotional abuse with some intensity in one particular scene. 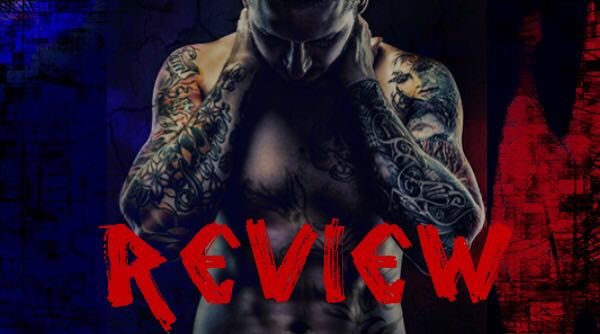 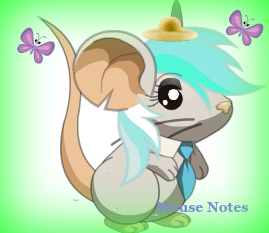 I received an ARC from the  AUTHOR JAMIE ROBERTS in exchange for an honest opinion. This is Mismousey very honest opinion of her  book SCARS.

Having never read anything that Ms Robert’s has written before. I was unsure if I would care for this book. The blurb sound excellent- so I had to read it. Boy am I glad- As I was not disappointed at all.

From the moment I open the cover of the book . I was hooked and held captive. I had to find out who this mystery person was. I was so taken with this story – that I had to finish reading it. I could not put it down till the end.

Ms. Roberts has a gift with creativity. The way in which she has created her  characters with such depth and feeling and emotion. You are able to visualize them right before your eyes  as they go through everything. As for the way in which she describes the scenes- it is truly genius. They are described right down to the smallest  blade of grass.

Scars is about a young 17 yr old who thinks she has it all. A wonderful family – she loves her big sister- in a few weeks she will be turning 18 and going away to college. She even has a stalker. Crazy huh ? Lilly doesn’t mind having the stalker- she thinks it’s kinda sexy. He isn’t hurting her- matter of fact he rescued her. But what does he want? And who is he and what does he look like?

After a while he lets her call him “J” but he is still always watching her. He knows what she is wearing at all times. He is afraid to tell he the truth about himself. Cause if he did he would loose her, Do they have a connection that Lilly doesn’t know about ? If so who is it ?

This book has so many twist and turns it. It is a MUST READ FOR ALL. I recommend it for all readers. Mismousey gives this book a firm 90 out of 5 mouse paws !!! NOW ADD THIS ONE TO YOUR GOOD READS READING LIST THEN RUN AND GET YOUR COPY TODAY!!!

Ms Roberts this is a fabulous book. I am now a faithful reader of yours . Have to have more of your books!!! 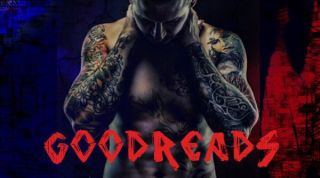 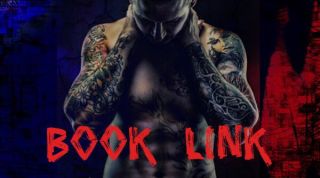 viewBook.at/SCARS
Only .99c until the 2nd of July
or #Free on #KU 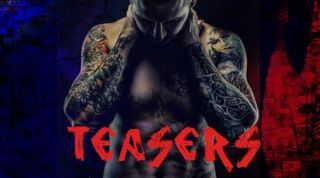 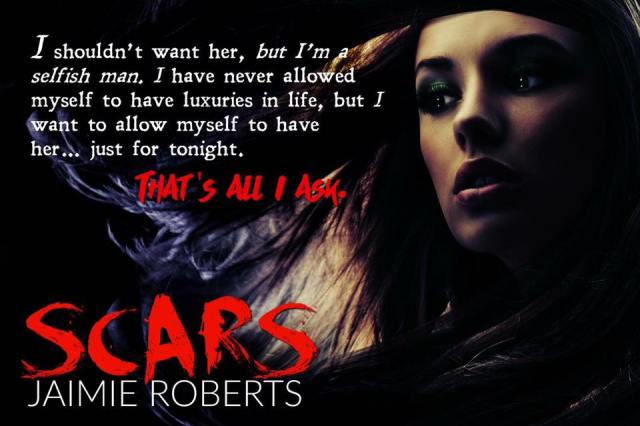 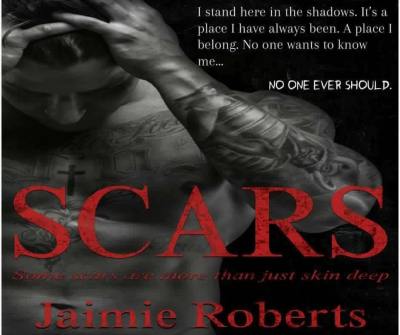 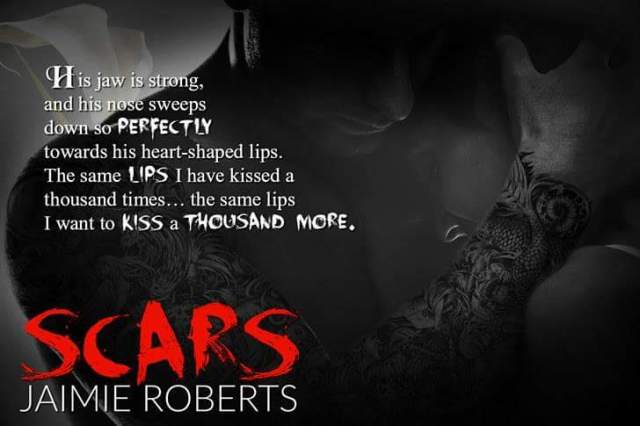 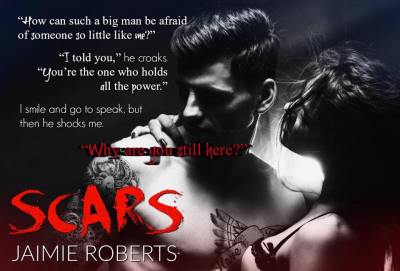 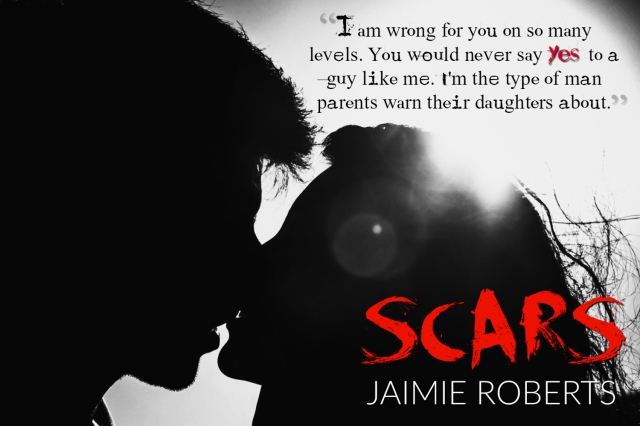 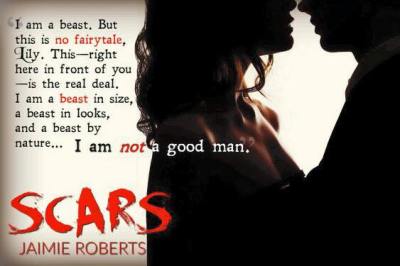 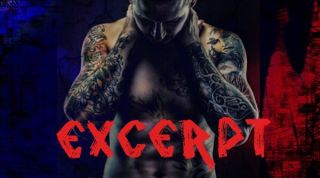 He pulls his head back leaving the lingering smell of spice invading my nostrils. It makes them flare violently, trying to take in as much of him as possible. Once he does pull back, he lingers for a moment and my heart beats rapidly against my chest. Can he feel it? Can he hear the boom, boom, boom sound thumping against my ribcage? It’s almost deafening me.
“Trust me,” he says, leaning in to touch my lips with his. At first he moves in slow, coaxing my mouth open a little. I suck in his breath, taking every morsel of his minty fragrance. I’m not sure why my body is reacting to his every move, but it’s almost as if it’s seeking out something, and that something is this mysterious patterned stranger standing in front of me coaxing my mouth open to meet his. 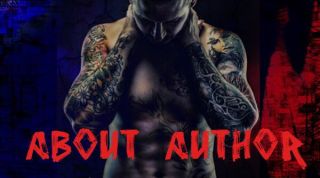 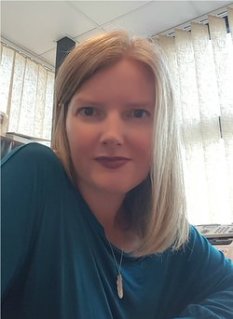 Jaimie Roberts was born in London, but moved to Gibraltar in 2001. She is married with two sons, and in her spare time, she writes.

In June 2013, Jaimie published her first book, Take a Breath, with the second released in November 2013. With the reviews, Jaimie took time out to read and learn how to become a better writer. She gets tremendous enjoyment out of writing, and even more so from the feedback she receives.

If you would like to send Jaimie a message, please do so by visiting her at:

Until I Met You: getBook.at/UntilIMetYou

LUCA: You Will Be Mine: getBook.at/LUCAYouWillBeMine

LUCA: Because You’re Mine: getBook.at/LucaBook2 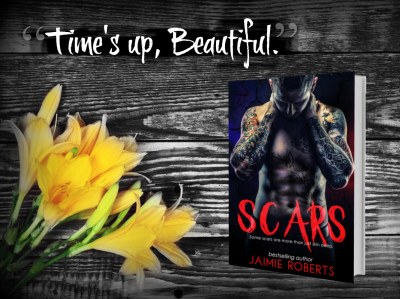 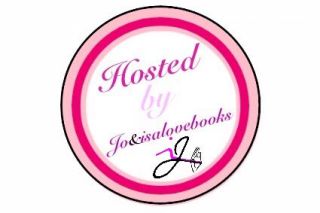